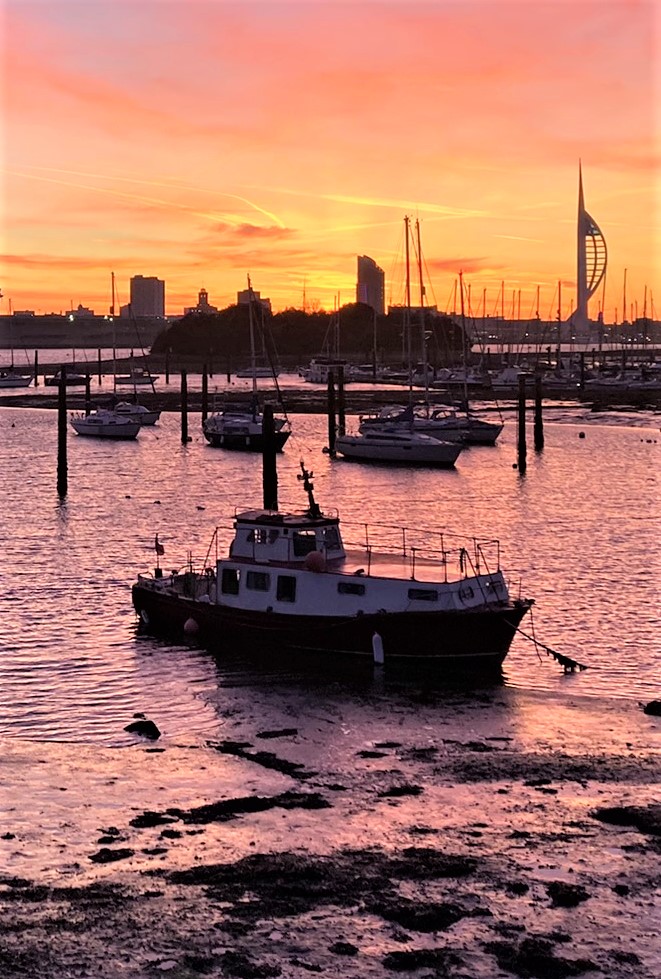 Sunrise following the winter solstice has been for millennia a significant point in the year for people. Today will be all of 2 seconds longer than the day before but that is enough to herald a sense of hope as each day gradually lengthens towards the new year to come.

This morning I had been up very early, out taking my husband to hospital for a minor operation, dropping him off in the dark and cold before leaving with my fingers crossed that all would be well. The sky started to lighten as I returned to Gosport and I realised that we were going to be treated to another spectacular sunrise.

So where better than Gosport’s own Millennium Bridge to stop and reflect on hopes for the coming year while watching the sun rise over Portsmouth Harbour?

The juxtaposition of the wonders of the natural environment (I particularly like the early light at low tide) with the aircraft carriers and the Millennium Tower says a lot about the challenges we and the natural world face in the modern world.

At times I feel a bit like the little red fishing boat with its faded and peeling paint resting on the mud in the foreground. But today I feel as joyous as the seagulls screaming and wheeling in the winter sky above the Bridge.

I hope that this year we will finally be able to celebrate the repair of the opening mechanism of the Millennium Bridge and I am looking forward to watching boats being able to pass up Forton Creek as originally intended.

I am also looking forward to watching an improvement in the natural environment adjacent to the Bridge and around the Creek as the seasons pass. Having come to bird-watching rather late in life, I love watching the birds in the Creek . Bird Aware Solent has some interesting walks and talks and I hope to be able to join one of these over the coming months..

Hopefully this year we will also be able to get a heritage information board about the Bridge established at the Royal Clarence Yard end, a new litter bin and better signage for the Millennium Promenade.

So here is to a better, more hopeful year ahead for everyone reading this. I’m now off to pick my husband up from hospital and am looking forward to a speedy recovery for him so that we can go back to exploring Gosport’s fascinating waterfront and history together…